Absolute Safety for all!

You want is faster? Make a trade! You the Absolute Safety and we, Bayze, the money to build the World Trade Port for all.

Bayze United - Joy for All

for Timely Revelation of the Unknown Unknown in your Benefit

7- Friday the 13th of November 2015, First official Blue Swan Analysis on a mega project of 700 million and with success. Also measuring of the OI ( Organizational Intelligence ) which is addable.

8- July 2016 expanding de Blue Swan Theory for stress relieving ( Stress is a Silent Killer and it also can explode! )  in projects and for de general public.

A- Expanding BST/BSA to other projects, companies, government, papers  and cities in the Netherlands:

- Letter to mayors, papers and  government

B- Expending BST/BSA to the airplane industrie, insurance companies and banks.

A- Status the Development of the Blue Swan App which will be ready end of 2016.

Is it really possible?

Yes it is since 27th of December 2014 available. No abracadabra, not philosophical, not psychological, no hocus pocus, no believe…but just a systematical instrument, a tool. The Blue Swan theory has been tested since 2006 on large infrastructural and petro-chemical project with success.

The keyword is Serendipity!

But Serendipity captured in the golden triangle-model:

1-Efficiency ( climbing mountains while leaving nothing behind including yourself )

These 3 words have one word in common and that is the word Goal.

Explanation of the Blue Swan Theory which generates Serendipity ( or luck ):

1- Take two goals ( work & hobby/dream ) otherwise you hinkle. It is about the interaction between the 2 goals that will reveal hidden things / worlds ( that is serendipity! )

2- Be a yes-person. Have some gutz! In every person is a Sherlock and a Watson. Help each other quickly and even unasked. It will generate serendipity.

3- Reach you goals at the cost of nothing at all ( also not yourself ). With this 3rd rule you must think hard about your solution(s) for a challenge. This will also generate serendipity.

and you will get a Serendipity Rain.

Angela Merkel: "Absolute Safety does not exist". She's stated that ( as a Watson ) without knowing that the Blue Swan has landed on Earth on 27th of December 2014. But in politics she's a Sherlock. 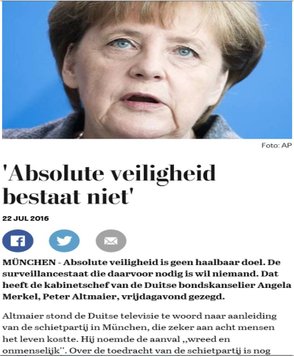 Alfred J.Bollebakker a.k.a. The Beast a Sherlock in Absolute Safety and a Watson in politics. But he is efficient and learns fast. Will Angela keep up? 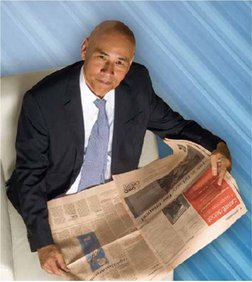 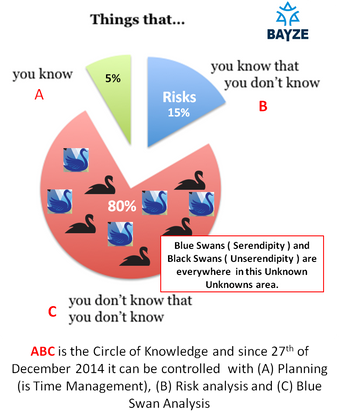 The Circle of Knowledge

STEP 2: Use the Pyramid Principle, do NOT judge the past but analyse it. Judging is NOT efficient. It will generate unserendipity.

The table above is the OI ( Organizatioal Intelligence ). It can be filled in by a person, a team, etc. In the App that will be avialable end of 2016 it is addable. At the start of a project all items gets a 5. During the project it can rise to a 10 or fall into 0 ( You or the Project does not exist anymore ! )